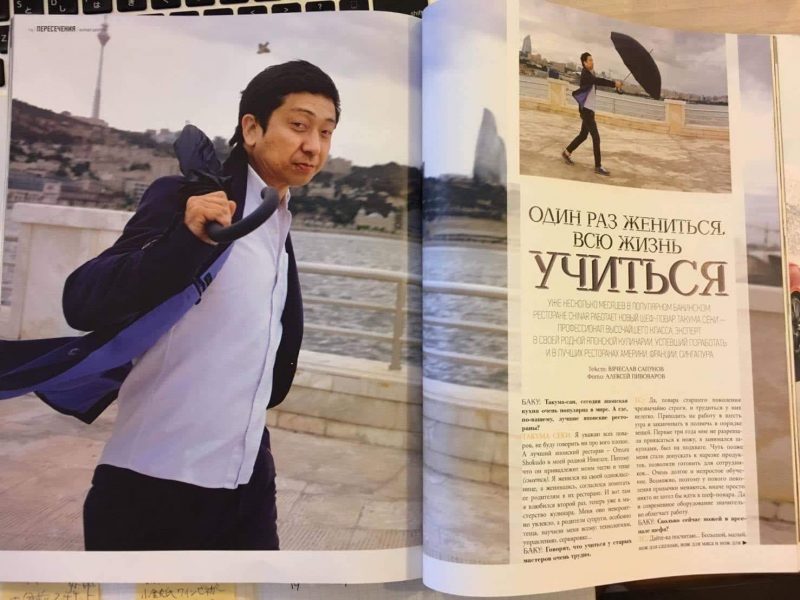 Located west of the Caspian Sea, surrounded by the Russian Federation, Georgia, Armenia and Iran, and with a land area of about a quarter of Japan’s size, few people in Japan or Singapore are familiar with Azerbaijan. In recent years, however, Azerbaijan’s economic growth has attracted a lot of attention as a country with abundant natural resources.

I had the opportunity to interview Chef Takuma Seki in Baku, the capital of Azerbaijan, who has been working there for about a year since 2018.

CHINAR Restaurant is one of the restaurants controlled by the local conglomerate PASHA Holding, which has many political and businessmen as clients in the region.

The president and his officials once visited the restaurant for a re-election victory celebration after the presidential election.

The Japanese food boom continues to sweep the world, and Azerbaijan, with a population of about 9.9 million, is gaining popularity, but it is difficult to provide authentic Japanese food because distribution is not yet in place.

Because Azerbaijan is a landlocked country, the most common route from Japan to Azerbaijan is via Belgium, so it takes a long time to get the ingredients.

For this reason, Chef Seki was in charge of the restaurant’s concept of Asian cuisine in general and revised the menu, rather than focusing solely on Japanese cuisine. In addition to cooking on-site, he also struggled with cost management, staff training, and other management tasks to enhance the restaurant concept.

We asked Chef Seki about the possibility of promoting Japanese food in Azerbaijan.

Baku was recognized as a UNESCO Intangible Cultural Heritage site in 2013 for its Japanese cuisine.

Unfortunately, however, there are not enough ingredients in the country at present, and direct transportation from Japan is expensive, so there is still a lot of work to be done to provide authentic Japanese food. However, we are confident that if we can correct these problems, the food will surely be accepted by the local people and demand will increase. Many people are interested in Japanese culture, and our staff members also go to Japan for training. Recently, we started to serve shabu-shabu in our restaurant (CHiNAR). Due to the influence of the media, we are gradually gaining recognition and we feel the potential of this restaurant with a great reputation among our customers.

I’d like to try ramen and udon in the future. In other countries, Japanese food is often referred to as ‘sushi’, but we don’t have fresh fish, so we can’t offer satisfactory performance. It’s a pity that we don’t have enough fresh fish.

Some companies from Japan are considering expanding into Azerbaijan in anticipation of the country’s economic growth, and we asked the chef for his honest opinion on this point.

From the outside, it seems that the economic growth of Azerbaijan’s rich natural resources is heating up, but it’s far from over. In many ways. I think it is still too early to enter the market. I don’t think it’s at the level of development that is being talked about in Japan.

When asked about his own vision for the future:

Chef Seki’s reply was “I would like to share delicious ingredients and drinks from different regions of Japan with people around the world and contribute to the revitalization of the regions. I’m Japanese, so I think Japanese food is the best in the world (laughs). I also want to use food to bring peace to the world and pass on a future with dreams and hope to the next generation.”

From 2019, he will move his activities to Singapore again, and as of May, he is preparing to launch a new concept Japanese restaurant.

We will be following his future activities further in the second half of the interview (scheduled for June or later).

Chef for 20 years. Starting with the Beverly Hilton Hotel in Los Angeles in 2002, he has worked in many international restaurants. In Paris, France, he worked as an executive chef at Bound Paris, and came to Singapore in 2010, where he was in charge of management and menu development for Hide Yamamoto. He came to Singapore in 2010, where he worked as Head of Management and Menu Development at Hide Yamamoto, Executive Chef at IKYU and Chef de Cuisine at Shangrila Rasa Sentosa Resort & Spa. In 2018, he traveled to Fine Dining CHiNAR in Baku, Azerbaijan for menu development and to promote Japanese cuisine. In 2019, he moved back to Singapore for another stint and is currently preparing for a new concept Japanese restaurant.

This interview is a compilation of what the chef told us through Facebook messenger during his stay in Azerbaijan, as we stayed in touch with him.

During the interview, you could get the feeling that he was enjoying working with the local Azerbaijani team. They dared to have the local staff answer our questions and tried to give the staff the opportunity to play an active role in the restaurant. It was a great opportunity to see the personalities that are common to chefs with a global presence.

I was able to get a link to a video of the chef at the site, which I’d like to share with you below.

No comments yet. Why don’t you start the discussion?